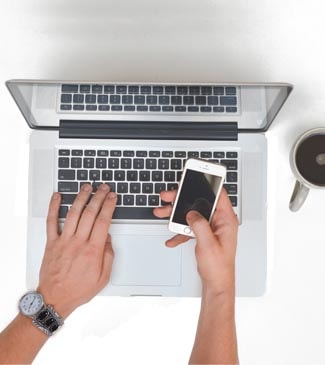 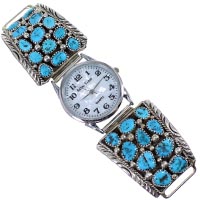 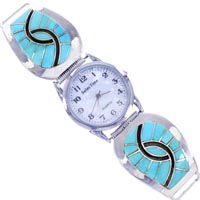 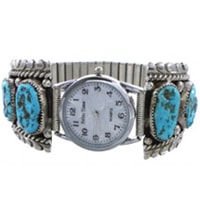 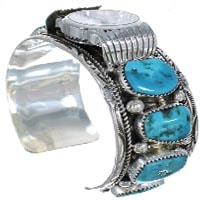 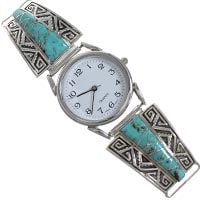 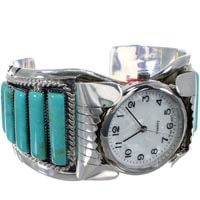 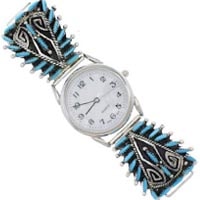 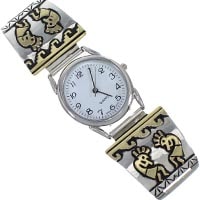 Mens watches have been a fashion and personal style staple for decades. Mens watches were initially created for the purpose of - you guessed it – keeping track of time. Over time, mens watches entered mass production and wearing became a part of a regular daily routine.

Today, mens watches aren't as necessary as they once were. Mobile telephones, iPad's and other electronic equipment have pushed traditional watches to the brink of becoming nearly obsolete.

However, mens watches continue to hold a place in modern society. These transcendent turquoise, Native American and southwest timepieces continue to be adorned by some of the biggest and brightest stars of the stage and screen today. Whether for business or pleasure, mens watches make a statement few other pieces of personal adornment can rival.

At SilverTribe, we featured the largest collection of turquoise, southwest and Native American watches for men that can be found online. Each mens watch housed in our timeless jewelry vaults is uniquely handcrafted and meticulously personalized.

Mens Watches and your Personal Style

It goes without saying that any collection is incomplete without classic and timeless mens watches. Turquoise, Native American and southwestern watches for men offer the wearer components other accessories simply cannot. Mens watches display class and charisma while also serving a functional purpose.

Here at SilverTribe, our vast collection of mens watches comes in turquoise, Native American and southwest-inspired themes that allow for total personalization. Before making a decision on which of our mens watches suits you the best, follow these tips:

While the types of mens watches house in SilverTribe's precious vaults differ in size, color, shape and style, many contain an appeal to those interested in turquoise, Native American and southwestern styles.

SilverTribe has maintained enduring relationships with some of the most talented and well-respected jewelry artisans on the planet. Each piece created by these renowned artists is done so with the utmost care.

While SilverTribe is committed to bringing the highest quality to our customers, we also promise to deliver the best and most affordable prices in the industry. There's never a charge for shipping at SilverTribe. That's right, all orders shipped to U.S. addresses are done so for FREE.

In addition, customers can take advantage of incredible discounts on mens watches and much more by signing up for SilverTribe's exclusive mailing list. Customers are eligible for promotional offers, giveaways and unmatched discounts simply by signing up.